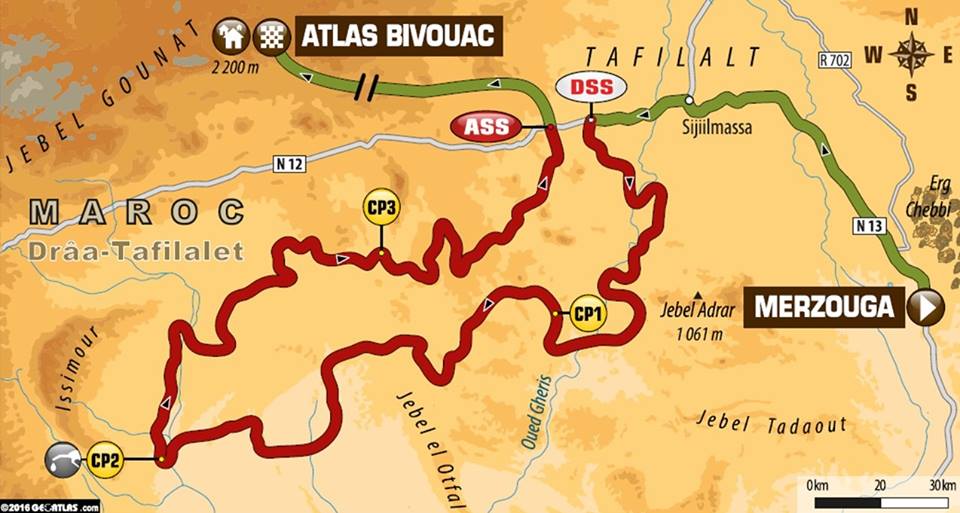 Stage with many mountains, some dunes and three strong trialeras. First, a rise of sand and loose rock. Crazy for the storm. I have avoided another trialera bordering the mountain. Crazy… with a very important difference in height and inclination to rise with the F 800 GS would have been very risky. In fact, when Luca Manca saw me at the foot of the trialera, it made me signals of that not climb it. And I flanked the last, a very soft sand with a bit of rock, dune by a small way that I have found. Later, bite the bullet and down! 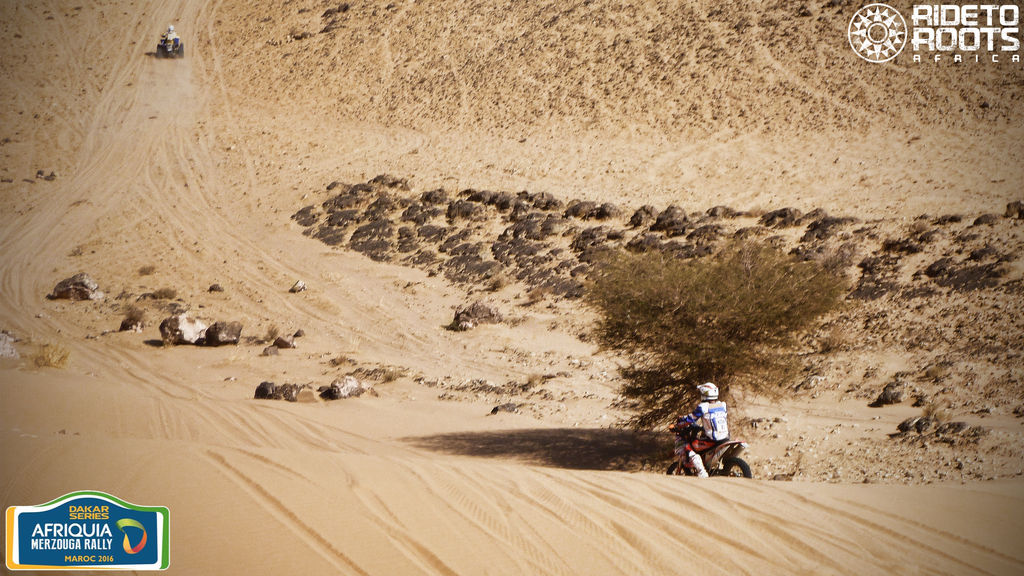 The Organization has interrupted the stage in PC2, half an hour as it passed that control. Strong wind prevents helicopters to do their job. I had been lost, due to the lack of visibility between PC2 and PC3. At some point I approached a small tree to protect me something wind, stopped the engine, I got off the bike and ate a couple of dates while thinking what to do. It was difficult to follow the roadbook under these conditions and the stroked had been erased by the sandstorm.

I have found the road and I saw my friend Diego with his quad, address Erfoud. Your finger injured during maintenance of the quad was torturing him. The circumstances have not accompanied on this occasion this large pilot.

At every stage I see injured along the way. Motorcycles abandoned, waiting to be picked up, while the pilots have already been evacuated by helicopter. Scenes that good. There are pilots who risk much and I cannot find sense.

Now I am directing to the bivouac near Goulmima. There is a car of the Organization at a junction near Rissani. Graziano is waiting for participants to give them instructions. I’m fresh water and after a brief chat, I am writing to Erfoud, where another car waiting at a traffic circle to verify that all participants pick up the proper road. On link road is long, and I suffer for the mousse, since the road very hot them and degrade more quickly. As it is the first time that amount mousse on the BMW F 800 GS, I try to not exceed 90 Km/h, which is frustrating in some long stretches of straight.

I finally reach Goulmima, where a police patrol is responsible for indicating the track to reach the bivouac. I’ll follow the roadbook which leads me by increasingly broken mountain roads. We are in area of the Atlas and the bivouac of the marathon stage is located 2,200 metres above sea level. As I’m moving the unevenness of the road becomes increasingly dramatic. The view is spectacular, but a just verdict and the free fall would be fatal. The road has very loose stone, holes and steps. It would divert me more if the Sun is higher. I don’t know how they will be the next kilometers and make me suffer a little thinking that you are getting. Definitely it is not the place to shoot at night, so I concentrate and try to bring a steady pace, nonstop.

She crossed a river and arrived at a plateau. I see the camp and gets me a rush. They come to meet me some colleagues, happy that have managed to finish this last stage. Gerard Farrés, who knows full well that with storm is not easy to overcome these stages, gives me hand and congratulates me.

Pulled-up the bike in the Park closed and sigh to turn off the engine. What pass have come here!